European Springs & Pressings – Developing its people for the future

As industry-leading spring manufacturers, investing in the future of manufacturing is important to us. Our next generation of engineers has successfully achieved either CITY & GUILDS or BTEC qualifications following a nationally recognised manufacturing apprenticeship framework.

Stuart McSheehy, Managing Director of European Springs & Pressings, says, “The value of apprenticeships can never be underestimated. Training the next generation of our people is crucial to ensure the business has the skills in its people for the future”.

Tyler joined us in 2013 as a Production Operator at the age of 17. Having worked for two years in this role, Tyler enjoyed the challenges he faced at European Springs but wanted to develop and improve his skills. He decided to take a pay cut and became an apprentice at the age of 19.

The apprenticeship has helped boost his self-confidence and has developed his skills significantly. Tyler did admit that he found the studying difficult, but his motivation to succeed saw him achieve his goal in April 2021.

Tyler is a significant member of our Small Order Springmaker team, working on complex projects, often with the Technical Director.

Well done to Tyler on your ADVANCED LEVEL APPRENTICESHIP IN ENGINEERING MANUFACTURE WITH CITY & GUILDS LEVEL 3 AND NVQ LEVEL 3.

Alan started in 2015, at the age of 18, having already been through sixth form at school. He spent time working in each department during his initial training but developed a specific interest in wire forming.

While completing his studies in performing engineering operations, he became heavily involved in the productionisation of a new FMU4. Although Alan’s apprenticeship journey has been longer due to his initial studies, he managed to complete his apprenticeship in 2020 whilst working full time. Alan is currently an essential member of the wireforming team and principal setter for the FMU4.

A huge congratulations to Alan on being awarded an ADVANCED LEVEL APPRENTICESHIP IN ENGINEERING MANUFACTURE WITH BTEC LEVEL 3 AND NVQ LEVEL 3.

Rob started in 2016 at the age of 19 and spent time working in each department. He developed a real passion for the Press Shop — probably because it had a good rhythm and was loud, like the music his band makes!

Having developed significant skills in this area, Rob has become heavily involved in Bruderer presses and stamping technologies. He is an instrumental part of the Press Shop team in the layout and commissioning of the new press shop extension.

Rob managed his studies whilst building a life with his partner and recently achieved his goal of being awarded an ADVANCED LEVEL APPRENTICESHIP IN ENGINEERING MANUFACTURE WITH BTEC LEVEL 3 AND NVQ LEVEL 3. Congratulations Rob!

Tom joined us in 2016, straight from school at the age of 16. Initially, he spent time working in each department during his training but developed an interest in toolmaking, where he liked the order and accuracy of the work.

Having developed a wide range of skills in this area, Tom spent time working on tool repair and assembly. Sticking to his studies, at the end of 2020, Tom achieved his goal of being awarded an ADVANCED LEVEL APPRENTICESHIP IN ENGINEERING MANUFACTURE WITH BTEC LEVEL 3 AND NVQ LEVEL 3. Well done, Tom!

Tom is currently honing his skills and experience on the EDM machines as a trusted member of the toolmaking team. 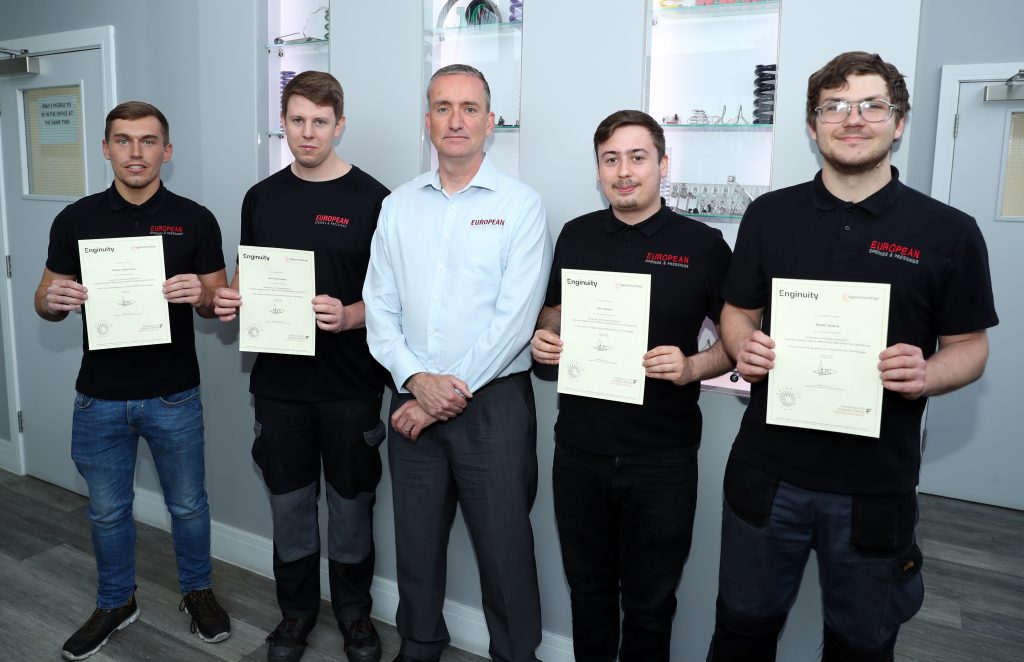 Our Managing Director Stuart McSheehy speaks about the importance of our apprenticeships, saying that “not only is this a fantastic achievement for personal development it also inspires the next generation of engineers and spring makers. With the challenges of 2020 behind us we are all very proud to present our latest apprentices with their qualifications.”

By welcoming apprentices every year, we see the benefits of having a development plan in place, and many of our qualified apprentices continue to develop their skills as spring technicians.

It’s essential to strengthen our knowledge and introduce more diverse skillsets into our workplace, including preparing for future growth within manufacturing.

If you’d like to discuss the potential of joining our team or then please get in touch with our friendly team.