Springs have been a part of some of the most innovative designs in the world over the years; you may even be surprised by what springs can be used for! But, one of the most popular inventions to use a spring –the slinky – was actually created totally by accident.

The childhood toy favourite has been loved by many for generations, but do you know the success story of the slinky? Well, here at European Springs, anything spring-like captures our attention – read on to find out more! 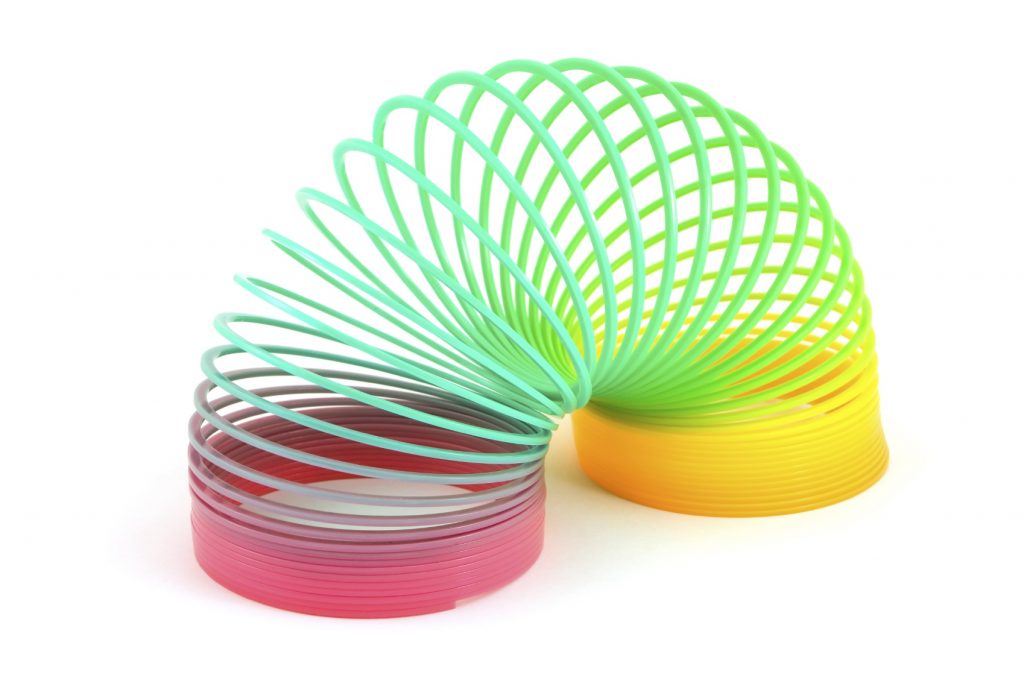 The Story Behind the Slinky

When looking at the success of the slinky, we must first answer the most obvious questions; who made the slinky and why was it invented? According to the annals of history, the slinky was invented way back in 1943, when a naval engineer was attempting to use springs to solve a common problem when working at sea.

The issue in question was the effect that the motion of a ship had upon many of the sensitive onboard instruments, although some tales also claim that the engineer – Richard James – was instead trying to fashion a device to monitor the power of his ship instead.

What Inspired the Slinky?

Regardless of his intention, James accidentally let one of his tension springs fall to the floor from his desk, and he then watched as the spring did an extraordinary thing. Rather than just falling to the floor, the spring ‘rolled’ downwards and landed on the ground the right way up, and it was this graceful motion that led to the birth of the iconic ‘slinky’ toy. Released in 1945, the toy sold all 44 of its original units in well under two hours.

Why Has it Stood the Test of Time?

The unique charm of the slinky has enchanted many people for decades, and more than 300 million units have now been sold. Increasingly popularised in different forms, including the rainbow and ‘slinky dog’ variants, the slinky continues to be a popular toy because of its simplicity, and has even earned acclaim as the ‘National Toy of the United States’. It has been inducted into the National Toy Hall of Fame and continues to thrill users all over the world to this day.

Surprising to some, however, the slinky can be used for more practical purposes, too. For example, slinky toys are extremely helpful when it comes to simulating the properties of waves, and they have even been used as a makeshift radio antenna and even in space experiments!

Whatever they are used for, the fascination of the slinky till remains; a recent article from Gizmodo, where a ‘perpetual slinky treadmill’ has been developed to prolong the entertainment of the slinky’s greatest trick (walking downstairs), had received immense attention.

It’s a fact – slinky’s are undoubtedly one of the most famous and popular ‘spring-based’ devices in the world. However, as any good spring manufacturer understands, there are hundreds of uses for springs is a less entertainment driven way. For example, some forms of springs are vital in medical equipment – agreeably less fun, yet far more useful!

Here at European Springs and Pressings Ltd, we are able to manufacture a large quantity of bespoke tension, compression and torsion springs (along with many other types) to suit any eventuality. So if you have a need for high-quality springs that will stand the test of time, contact us by calling +44 (0) 208 663 1800 or emailing info.bec@europeansprings.com.