In short, metal stamping and metal pressing is the creation (forming) of a shape in metal. This is done by either pressing the metal with a pressing tool or using a stamping die.

We have been spring manufacturers for over seventy years and are keen to share our passion for bespoke pressings and bespoke stampings with you. We currently produce a wide range of springs and wire forms for companies all over the world, from Sweden to China, so you can trust our expert knowledge. 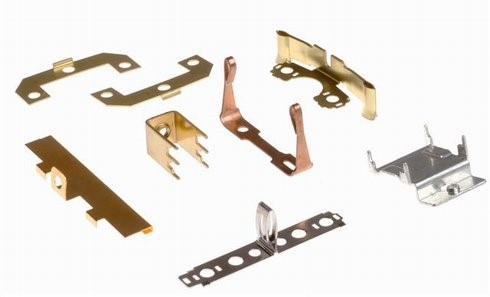 The History of Stamping and Pressing

Going back as far as 1880, stamping and pressing technology was built on the foundations of blacksmithing. In the past, blacksmiths would use hammers, anvils, and forges to coldwork metal, but in the age of industry, this quickly became automated with the creation of steam-powered hammering machines. Since then, we have been refining our manufacturing process to get to where we are now – high-quality products made quickly and efficiently. If you want to read more about the history of stamping and pressing, we recommend that you read our blog: A Brief History of Pressings and Stampings.

How Are Pressings and Stampings Different?

The words ‘stamping’ and ‘pressing’ are used interchangeably but refer to the same process. This is important to bear in mind when reading articles about pressings and stampings in case this isn’t clarified and the misconception that they are different products spreads.

Why Are Pressings and Stampings Produced?

Pressings and stampings can be used to become a part of many important products in modern day society, including bicycle parts, aeroplane parts and entire cans. In fact, pressings can be considered an instrumental part of the aerospace, automotive, and construction industries. We consider them so important that we even wrote a blog that considers the state of the world without having discovered stamping and pressing technology: Imagine a World Without Pressings and Stampings.

The number of items produced through stamping is quite broad, which shows how integral they are to modern life. Each different pressing will have its own meaning and importance within the industry it was created for.

How Are Pressings and Stampings Produced?

Stampings, or pressings, are created by inserting flat sheet metal into a specialist machine often referred to as a stamping press, but also sometimes called a power press. This metal is then formed into the correct shape(s) through the use of a metal die. A die is an implement which is pushed into the sheet metal. This forces the sheet metal to take the shape of the die.

After the metal is shaped, it may undergo further treatment including punching, blanking, embossing, bending, flanging and coining. Of these, punching is the simplest to understand as it simply refers to the desired metal shape being punched out of the surrounding material. We’ll explain the other operations a little further here:

Blanking – The process by which a flat shape is cut out of the material, this process usually leads to further processing. Did you know that all drinks cans start off as circular blanks?

Embossing – A shallow depression is forced into the material.

Bending – The material is shaped in one direction. This can happen multiple times to produce a particular shape.

Coining – Named after the item it was initially used to create, coining is the process by which a pattern is compressed into the flat sheet metal.

There are many other types of pressings too, including stretching, necking, and hemming.

What Are Pressings and Stampings Made From?

Our pressings can be made from a variety of materials to suit any industry’s requirements. You should contact us if you’re seeking a pressing made from one of these materials or an alloy: metal strip, flattened wire, melinex, carbon and stainless steels, copper, brass, phosphor bronze, beryllium copper, aluminium and superalloy. If you have a particular project in mind, get in touch with us so we can discuss which technologies best suit your designs.

As stated in the video below, good collaboration in the planning stage will give your pressing request the best chance to work with your product design ideas:

There is even technology that can run your pressing design through simulation software on a computer to ensure that it will withstand the strain of the application it is going to be used in, so ensure that you make the most of our design support when placing an order with us.

If you have any further questions about the processes of our metalworking, why not contact us directly and we’ll see how we can help make your next product design become reality. We can even provide you with prototypes to ensure that you will be receiving exactly what you ask for, whether that’s some flanging, bending, coining, or all three.